This recipe is for the folks who down Shamrock Shakes from McDonald’s only slightly concerned that it has 54 ingredients. This is for the people who get their weekly Frappuccino fix the moment they get that Spring Has Sprung feeling. This is for everyone with a little bit of Irish in ya.

Just because I’m a foodie, doesn’t mean I’m a food snob. I was raised on the Shamrock Shake and Frappuccino, and I’m unashamed. Ok, maybe a little ashamed.

Hate it all you want, though, the Shamrock Shake was actually the reason Ronald McDonald Houses began. Launched on St. Patrick’s Day in 1974, the green milkshake promotion was originally a fundraiser hosted by McDonald’s to purchase an old house located near the hospital to create a home away from home for families with children who were very sick.

Nevertheless, I wanted to recreate a more, shall we say, sophisticated version of this pastime for St. Paddy’s. This recipe uses fresh mint from my garden, real coffee from Farmer’s First coffee (we have a subscription), and a little luck (2 shots of Irish Whiskey).

The idea for making an Irish Coffee with mint was inspired by my friend Bethany, who will be visiting me this week. Back in 2011, we lived on MacDougal Street in the Village together. She worked at the old Caffe Reggio, the 1920s-era cafe that claims to have made the first cappuccinos in America and has been featured in many films, including The Godfather. While she worked, I used to sit in the quirky cafe, people watching and writing short stories, and she’d bring me amazing iced mint mochas and pine nut cookies. It was a lovely little era, and I’m looking forward to her visit.

While I normally shun green-colored mint ice creams (if it’s natural, it should be white!), I had to make it at least a little bit green because there’s no need to be a boring snob on St. Paddy’s Day. 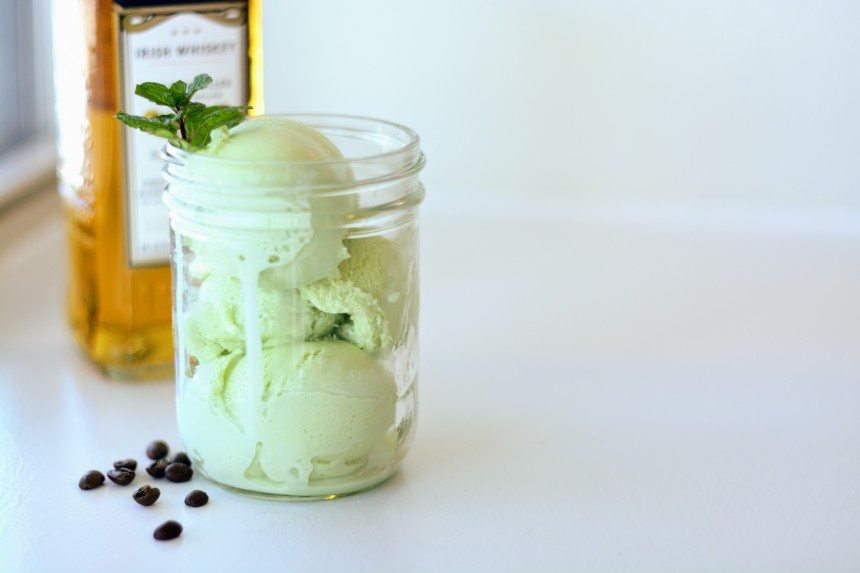